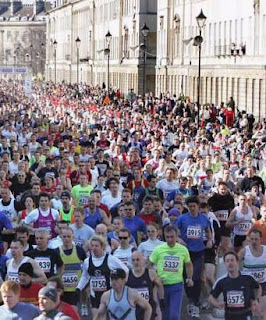 Posted: Friday September 30 2011
Following the stunning success of the Regency team in the Bristol Half earlier in the month (I was 7843rd) I am now putting together a top flight Regency team to compete for honours in our very own Bath Half next year. (By “top flight” I mean anyone who can stand upright 😉

I’d love some Regency tenants and friends to join me. The entry is just £39 with all the proceeds goings to loads of good causes.

It will be a fun day out, and if you wear a Regency t-shirt (soon to be re-designed!) I’ll buy you your beers after the run.  Please enter here www.bathhalf.co.uk and let me know when you’ve signed up – see you there.

Please find a link below to some photos from the fun night out I enjoyed with Regency clients on the Bizarre Bath Comedy Walk last week.

I am sure all of us would highly recommended the walk – which, we were told, is now the second highest rated tourist attraction in Bath after the Roman Baths (on TripAdvisor.com)

Hope you enjoy the photos, and for those who were on the walk, how on earth did the rabbit save itself from drowning in the Avon? Have you figured it out? 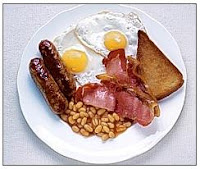 
Regency Offices is to launch a regular once-a-month breakfast club for all our tenants and guests.
The first breakfast will be staged towards the end of October at a central Bath restaurant. The get-together will enable clients to talk business, introduce each other’s services and hear guest speakers.

We’re still looking at locations, so watch this space and your inboxes for your first invite.  If you’ve got any suggestions for a great location, please let me know tony@regencyoffices.com

Thursday, September 15, 2011
Think you know Bath? Wait until you go on the Bizarre Bath Comedy Walk!
All Regency Offices tenants are invited to join me on this fun tour of our beautiful city on the evening of Wednesday September 21st 2011.
Bizarre Bath leaves the Huntsman Inn, North Parade Passage, every evening at 8pm. The entertainment lasts approximately 90 minutes (but don’t worry – we’re not walking for all that time!)
Please email me if you can make it tony@regencyoffices.com
Hope you can join me for this really fun night out – and the first drink is on me!

Wednesday, September 14, 2011
I was talking to one of our tenants this week and he reckoned Regency was now the biggest serviced office provider in Bath.
I was stunned, because this had never occurred to me before, though thinking about it he is probably right.
We are providing space to about 60 businesses. I can’t think of anybody else in Bath who can match that.
However, what I want to know is this…if I am the MD of Bath’s biggest serviced office provider, why I am still on my hands and knees most days screwing desks together! Answers on a postcard please…

This was me earlier today: 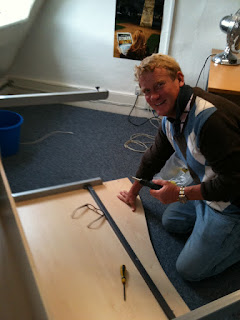 Tuesday, September 13, 2011
I ran the Bristol Half Marathon over the weekend…and with no previous training, unless you include an elixir of fine ale and wine the night before.
Joking aside, it was an amazing event, and the camaraderie among the runners was fantastic – no way could I have completed that distance without it. The last few miles were extremely tough, but in true Regency style there was no turning back!
Sadly, I’ve got no photos to prove I was actually there, but if you go to the Half Marathan website http://www.runbristol.com/ and search my name you will find my time – see pic below.
I will leave it to you to guess which of the two Tony Williams on the day was me! 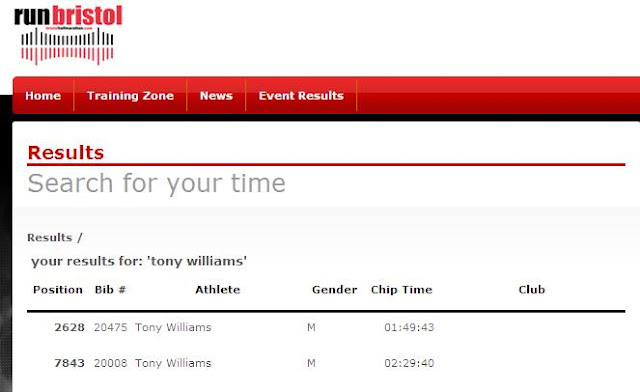 Friday, September 09, 2011
We know their name is probably bigger than our ambitions (though you never know!) but we’ve retained Go National to handle our PR for a whole year ahead.
They’ve been keeping us in the headlines all summer, and have also made me more focused on media relations and inter-acting with the growing band of lovely people who rent space with us – almost 60 of you in fact! I am also getting to grips with all these new “social media” channels like Twitter, and blogging!
Go National PR’s MD, Graham Parker, goes quite a way back with Regency, having rented an office at 2 Wood Street up to a couple of years ago. He now rents the top floor office at 3 Wood Street.

When he was with us previously, Graham was running his website AskYourNeighbour.co.uk which he sold to a Canadian company last summer…though he tells me the “millions” he fantasised about when he became a “netrepreneur” have not materialised.
Being a former Fleet Street journalist and successful magazine publisher, Graham decided to return to his roots when he set up Go National last Spring.
His idea is to focus on companies in the West who want some national publicity and strategy input.
Having also set up three businesses targeted at national audiences, Graham feels he can share some his valuable knowledge of “going national”, not only in terms of PR but also in terms of the business challenges.
Anyway, any suggestions I am keeping Graham on simply because he likes a pint of real ale now and again will be firmly refuted. Your round Graham!